As you know, we writers spend our days in deep philosophical reveries, contemplating Life, the Universe, and Everything. However, there are some questions that seemingly cannot be answered, even by fiction. I have started keeping a list, and I present some of them here. If you have any more of these questions yourself–or, have answers to any of these questions (huzzah!) please weigh in.

+ Why is the song “My Way” only sung by known jerks?

+ When did flowers cease to be about fragrance? The idea that we invent roses that look pretty but have no smell amazes me, and not in a good way.

+ Do we really need both “hearty” and “hardy”? It seems either will do.

+ Why do they make it so an $800 dishwasher depends on a 3 cent piece of plastic that holds the detergent chamber closed?

+ Why are the spigots in those lovely beverage dispensers so high up? A good quarter of the drink will be un-pourable.

+Why do people who make toothpaste, dental floss and mouthwash assume everyone likes the flavor of mint?

+ Why do so many people think you need to come to a complete stop in a car before turning right?

+ Why do drivers now assume they MUST pass left-turning cars on the right, even if it’s dangerous, when they only save 10 or 20 seconds?

+ Why do people use “vanilla” to connote something boring or uninspired? I believe the flavor vanilla is phenomenal.

+ Why do they make pens that don’t write? Or at least don’t write for long, and are so choosy about types of paper and surfaces?

+ Why have police vehicles gone from flashing lights to a roadside light show extravaganza that blinds passing motorists?

+ Why do butter pecan and chocolate ice cream taste better when they come together in the same carton, rather than if you scoop them from separate cartons into the same bowl?

+ If the flies who are buzzing against the screen have lived their entire lives inside the house, are they suddenly really confused if they’re loosed into the vast expanse of sky?

+ Does Benedict Cumberbatch smoke simply to keep from being perfect? And can he not think of another fault that wouldn’t kill him?

+ Did they need to pay to install this sign?

Why I Love Benedict Cumberbatch and Charles Esten

Recently, a woman wrote a humorous blog for Huffington Post about how much fun it was to be a Benedict Cumberbatch fangirl even though she’s middle-aged. I suspect that folks who walk into my office and see my BC calendar might suspect she speaks for me as well.

Not exactly. Or, at least, not entirely. So why do I love Benedict Cumberbatch and Charles Esten? 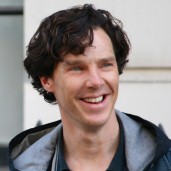 1) Enormously talented and serious about his work, Mr. Cumberbatch spent decades honing his craft and getting a good footing playing fops and “child-raping chocolate magnates” and doing Ibsen on the stage  before his career and fame skyrocketed.  “The trajectory (of his meteoric rise) was extreme,” according to Martin Freeman, who ought to know.  You’ll notice I said he was getting a good footing–not paying his dues, as if there’s a certain amount you must pay and then you get to join the club. No such thing. But it makes all the difference in the world if you’ve gotten to work at your craft and know who you are before fame overtakes you.

2) His male co-stars go all fanboy on him. Even before the hairstylist for the second iteration of “A Study in Pink” got a hold of him and females world over took notice, seemingly every talented young man with whom he made movies had the best time ever with Ben.  I’m not sure what he and Tom Hiddleston were doing during the shooting of WAR HORSE, but whatever it was, when you see the grins they have when they talked about it, they were obviously having a grand time.  By his own admission,  Jonny Lee Miller, with whom he traded roles in Danny Boyle’s FRANKENSTEIN, used to call him up after each episode of SHERLOCK and “go all fanboy” in discussing his acting choices. But my favorite is Tom Hardy, with whom he made STUART: A LIFE BACKWARDS. There’s a video interview in which Mr. Hardy talks about Ben’s acting: “He has a sensibility and a directness and an oddness and a fantastic sense of humor…in acting, he  makes “next level choices…He’s a very generous, very sensitive, very focused, disciplined actor. ..it allows me to be free to do whatever I need to do.  Not everybody runs in the Olympics–[As an actor] Benny should be running in the Olympics.” OMG. Who freaking cares about the shirtless wonders of People’s Sexiest Man Alive” issue. “Talk talent to me” is way beyond  “talk dirty to me.”

3) He’s a gentleman. And he was long before Colin Firth held forth about it in his TIME Magazine tribute. There’s another video from STUART in which Ben arrives on set and introduces himself to all the day players, shaking hands and making them feel important and included.

4) He can chop onions. There’s a segment of a cooking show to prove it. My husband can chop onions, also. That is one reason I am married. I have little patience for men of no practical use.

5) He was nearly murdered and it changed him. He has spoken on several occasions about the time he and some of his fellow cast members from TO THE ENDS OF THE EARTH were carjacked and kidnapped in South Africa and he really thought he was about to be killed. Apparently, this had a profound effect on him; he decided, once he was safe and alive, not to play it safe–that you never know when your life will end and you’d better ring every ounce of living out of it, take risks and chances. It seems he has, and it has paid off. A profound lesson for each of us.

6) He’s a silly dancer, but he doesn’t care. Have you seen him dancing to THRILLER?  He is also in good shape without having 6-pack abs. To my mind, 6-pack abs on actors is like a female actress having a size-0, prepubescent body with breasts. They’re both shapes that do not exist in nature and signify a horrific buy-in to the Hollywood zombie culture. But that’s my prejudice.  Ben is also handsome without being pretty. Much of his handsomeness comes from inside. Others could not wear the same face as well.

7) He is loyal. He is willing to work with his parents on SHERLOCK, which demonstrates an alarming vulnerability to me. He also did his best to stand up for Mark Gatiss Steven Moffat when CBS asked them to write a modern-day NYC version of Sherlock and promised they wouldn’t do one without them and then they did. Ben had a difficult dance because he was also doing his best to also be supportive of his friend Jonny Lee Miller, who was cast as Sherlock; yes, the yin and yang actors at it again. You can’t make this stuff up.

8) He is an innately decent human being. He takes his art and craft seriously, but he also sees the bigger picture in the bigger world. He recognizes that, compared with many in the rest of the world, the problems he has (such as being labelled “upper class” in Britain), are “champagne problems” (as Brad Pitt advised).  Yet this guy photobombs U2. What more can I say?

1) Enormously talented and serious about his craft, he was spent decades being a guest star as everything from “Secretary 67” on MURPHY BROWN to a doctor on ER. He was a regular on one season of many many shows.

2) He is smart, funny and can carry a tune. Which came in really handy on 196 episodes of WHOSE LINE IS IT ANYWAY?

5) He was into his 40s when he became a dramatic swoon-worthy, record-releasing leading man on the television show NASHVILLE. He now sings at benefits and, yes, at the Grand Ole Opry. Again, got his footing, plied his craft, and became a decent human being before “breaking out.” He also, apparently, sees a bigger world.

6) His young daughter nearly died from leukemia and it rocked his world. He and his wife now do a lot of fundraising and work for other families that have children with cancer.

WHY DOES THIS SPEAK TO ME?

1) First, and perhaps most obviously, I am no longer in my twenties, I have been plying my craft and getting a footing for a while now. And yes, half a million people have read the Eden Thrillers so far(!), but I wouldn’t mind a few more million. Could happen, right?

2) I can’t begin to describe the breeding ground for fiction that goes on in my mind. Nor can I describe how well both of these handsome, been-through-it decent human beings with a sense of humor are ripe with character potential.  (Have you read the movie mystery THESE VIOLENT DELIGHTS? Written before I heard of either of them, but how could you tell?) They are EXACTLY who you throw into a maelstrom of intrigue and moral quandaries and then just step back and grab your laptop.

3) I don’t know these gentlemen, and likely will never know these gentlemen, but I will tell you these very same qualities are what force me to write. Biographies about Raoul Wallenberg, the young Swedish architect who saved 100,000 Jews in Budapest at the end of World War II. About Princess Kaiulani, heir to the throne of Hawaii who brought healing and aloha to the islands, and died of a broken heart at 23.  Like Jaime Richards, our protagonist in the Eden Thrillers, I am a sucker for nobility of spirit. This is also what attracts me to my closest friends, and made me marry my husband. And while I will tell you that B.K. Sherer, my Eden co-author, who happens to also be an active duty Army chaplain, is NOT the basis for Jaime’s character, I will also tell you that’s because B.K.’s own life and character is waaaay more compelling.

It’s important to me to remember that good guys win every once in a while.

Just look at Chip and Ben.