World Book Day is celebrated this month in the United Kingdom (here it is World Book Night in April). School children are urged to dress up as a fictional character. Apparently one little boy has already been sent home for coming in a “Christian Grey” suit. (If he was in my class, I’d have him go back to the hall and re-enter as Willy Loman. Problem solved.)

So, while it’s not OFFICIALLY World Book Day here, it did get me thinking that ANY day is the perfect time to celebrate books.

In that spirit, let me celebrate the books I am reading right now, or have recently finished. I don’t usually read 5 books at a time, but I am just now, all very different, and for different reasons.

You might have heard that I’m not a big fan of end-of-civilization novels (scroll down to the post, “Hi-tailing It Out of Distopia” for an explanation). But my husband went out of town and left me this book with a note saying, “I think you’ll love it! Enjoy.” Now, my husband is sparing with his exclamation points, so I took the note seriously. The book is about a time in the not-too-distant future after a pandemic thinned the population by, well, almost everyone.

The story follows a small travelling company of actors and musicians who perform classical music and Shakespeare in the small settlements that remain. Granted, I haven’t finished the book, but the characters are interesting and real, and the book does seem to celebrate the good in humanity and even the “magical” everyday things we current readers take for granted.

DEAD UNTIL DAWN by Charlaine Harris

Yes, I realize I’m about 10 years behind everyone else, but there was a copy left by the bathtub and

what is a girl to do? Isn’t it great that once books are written, they continue to exist and be unique? I’ve met Ms. Harris, she is a down-to-earth person who is nice to other writers and willing to dish about Alexander Skarsgard. I’d heard the Sookie novels were “episodic,” and the series was a little much for me. But what the heck?

Here’s the what: Sookie jumps in on the first page, a fully-realized character with a clear eye, a sense of humor and a big chain. There isn’t much she isn’t afraid of, and her crazy Southern world is introduced as normal-wacky. Vampires? Shape-shifters? Southerners you recognize and a town that feels like a real place? Obviously, a kajillion people read these books because they’re just plain fun. So what if the plots aren’t exactly tightly woven? And my best guess about the series is that somehow the men–the showrunners, the producers, writers, directors–co-opted Sookie and struck out on their own. Obviously they were successful, but it’s not the same thing. 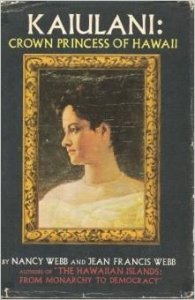 This one might strike you as kind of odd, after all, I did write a biography of Princess Kaiulani myself (that won the Carter Woodson Award, yay), and this biography was written back in 1962.  But here’s the deal. During the time my husband and I honeymooned in Hawaii, we saw a small newspaper article about Princess Kaiulani, and I fell in love with her.

I found the Webb’s book (and every other book on Hawaiian history in print) and then, we found the Webbs. They lived in Manhattan, as we did. By then, Nancy was battling Parkinson’s, but they welcomed us, time and time again, into their apartment. We would sit and talk for hours. A lot about Kaiulani and their journey to write the book, but also about their journey(s), period. They wrote radio dramas in the Good Old Days and had wonderful stories of a New York and a writing life not long gone. There is a new edition of their book out now, in paperback. My copy of their book is the hardcover, and it is signed. It is also falling apart. It is a prized possession.

Why did I pick this book up to start reading it? It was the beginning of a long journey, and I hadn’t read it in a long time. Some of the language used in 1962 sounds outdated now, even a bit insulting, but back then it was the politically correct speech of the day. But, they were a step closer to 1899, when “our princess” died. When they wrote, people who remembered Kaiulani were still alive. Honolulu was different 50 years ago, as it had been 50 years before the Webbs. But I’m loving it. Like a visit with old, beloved friends–and I mean both the Webbs and the Kalakauas.

LISTENING FOR THE HEARTBEAT OF GOD by J. Philip Newell

Every year, our church reads a book collectively during Lent. We are a church of people who love to learn 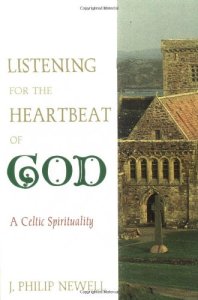 and to discuss ideas. This is a book about Celtic Spirituality, and it is fascinating. Oftentimes we Christians don’t realize how much of what we find in the Scriptures has to do with the lens through which we read the text. For example, the idea of Original Sin was pretty much plunked whole into Church theology by Augustine, who did us some mighty favors and some mighty disservices.

Here are two books I just finished, and I found them interesting counterpoints to each other.

THE BOSTON GIRL by Anita Diamant

The Boston girl is a grandmother who is telling the story of when she became herself to her granddaughter. It’s a very workable conceit. The main character came from a family of Jewish immigrants who arrived stone poor to live in the tenements of New York’s Lower East Side. Times were tough. Money was tight. Loved ones were lost. Marriage prospects were not happy ones. The possibility of education for girls was a far-away thought. And yet.

YET. Our heroine has pluck, she has hope–but mostly, she has friends. Her world broadens. Her thinking broadens. Her prospects,–finally–broaden. It is a specific person’s story, but in many ways, it is every immigrant’s story. It is a fast read, and it is wonderful.

WE ARE NOT OURSELVES by Matthew Thomas

Another immigrant saga, this one of poor Irish in the mid-to-late 20th century, it takes place in the 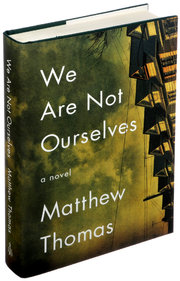 Outer Boroughs of New York City. Our heroine is also from a family who arrived stone poor (actually, drunk poor). Times were tough. Money was tight. Loved ones were lost. Marriage prospects were not happy ones. She managed an education. And yet.

YET. Our heroine is stoic, not plucky; without hope that things will get better (not because they couldn’t, but because, well, wherever you go, there you are), and most trenchantly, she has no friends. She is completely self-contained and self-absorbed. Friendship is dealt, like cards, not fallen into. It was the kind of book you admire greatly and don’t enjoy for a minute.

At least, that’s me. But the great thing is, there are books out there for everyone! There are new worlds and new ideas and new ways to think and to view the world and make us appreciate what we have, and then, on to the next. It’s quite the most marvelous thing.

Okay, last one up: My Life in France by Julia Child

Very possibly, one of the most wonderful books, ever. And not because it’s Dostoevsky or even Mary Stewart. Simply because Julia Child is an  indomitable woman, who can find delight in any situation. If you have trouble sleeping at night, keep this book by your bed. When you wake up, start reading. The phantoms of the night will fade into the France of the 1950s, your worries will fade into butter (it is Julia), and you will soon drift off, with a smile on your face.